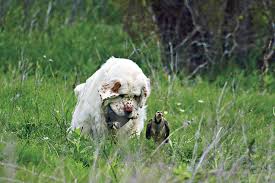 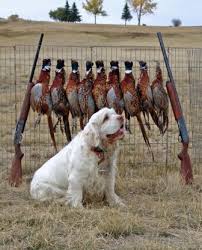 The AKC Hunt Test regulations state that “judges must know the hunting characteristics of the breeds they are judging..” (Pg. 23, paragraph-5) and that “various Spaniels perform differently.. Some breeds may not cover as much ground as rapidly as others but they must find, flush and retrieve birds and do so in a pleasing and efficient manner.” (Pg. 24, paragraph-2.) We believe this will be a valuable document for judges, hunters and future Clumber owners. This description of the hunting characteristics of the Clumber Spaniel is the consensus of opinion of CSCA club members who hunt wild birds over their dogs. It is a composite of the natural, inherited characteristics of the breed which we find desirable and want to preserve. Since training and experience can modify these traits, it is not a detailed description of every Clumber. However, when we start with these inherited characteristics, we find the resulting style pleasing and efficient for the type of hunting we do.

The Clumber style is best understood by examining the historical purpose for which the breed was developed. Clumbers were first recognized as a distinct English breed in the mid 1700’s. The gene pool was controlled by the “nobility” for the next 100 years. During this period of time, the Clumber was selectively bred for use in hedgerows and gorse. This was a very tough, woody stemmed cover. It was similar to the hardwood thickets, briar’s and swamps that are traditional grouse cover in America today. Sporting dogs developed specifically for this type of cover have a unique hunting style. (among the pointing breeds, “grouse dog” describes a specific style of hunting). A dog that hunts fast and hard in this hardwood type of cover will soon cripple himself. So, Clumbers were developed to hunt at a trot or a pace. It is a gait in which one front foot and the opposite rear foot move simultaneously. This is very different from the gait of a wheat field dog which normally drives off both hind feet simultaneously in a bounding or running gait.

This woody type of cover had a canopy of leaves which held in scent and slowed the wind current. This required a dog which was much more of a tracker than one which was developed to catch the body scent rising out of the grass and being carried by the wind. Since this type of cover was so difficult to penetrate, the Clumber was developed to use his nose more than his feet. Even today, he does not tend to cover every square inch of ground with his feet in hopes of startling birds he does not scent. If there is no scent, he will calmly discard an area and move on to new cover. This gives the Clumber a very lackadaisical appearance when covering ground which is devoid of bird scent.

Since the original cover was so difficult to penetrate, it required a dog with tremendous drive and determination to fight thru the brush when birds were scented. A fast hard flush was physically impossible, so the Clumber had to be very persistent on the trail until the bird was forced to the edge of the cover. Today’s Clumber should “come alive” when he hits bird scent, should show strong determination to explore the faintest scent and should be very persistent as he ” works it out”. Jim Spencer described it as a “painstakingly thorough” search at the slightest indication of scent. This persistence also makes them somewhat more difficult to call off an old fall or an old nest. The more experienced dogs will quickly recognize the difference, but junior level dogs should be given lee-way in this area. If they are not, we will lose this drive, determination, and persistence which are a characteristic of the breed. We will lose it in favor of the type of biddability which is very impressive in a field trail situation, but does nothing to actually produce birds in a hunting situation!

Shot-guns and ammunition from that period were not as powerful as today. They had even more cripples than modern hunters. Thus, a Clumber approaches every bird as if it is a cripple that he is very intent on catching. He slows down when approaching the bird, stalking it like cat, often crouching the last few steps before pouncing on the bird. He will attempt to bat down a flushing bird with his feet and pin it to the ground. If he is successful, this can result in a dead bird with no marks on it. You will never see a Clumber stick his nose under a bird and boot it into the air.

The Hunt Test standard uses the adjective “enthusiasm” repeatedly to describe spaniels. Enthusiasm and speed are not synonymous. The dictionary defines enthusiasm as “intense or eager interest; zeal; fervor”. None of these definitions has the connotation of speed, rather they describe an attitude with which a job is done. Nothing portrays a good Clumber’s attitude towards birds better than the word “intense”! We are aware of no records which indicate that water work was required of the breed, but most Clumbers swim well. Their entry is very deliberate and their speed is moderate, but they should get the job done. The Clumber coat is very heavy with an undercoat which protects them from cold water. Modern hunters have used the breed as duck dogs and report that they regularly break ice. This is clearly a quality we want in today’s Clumber.

To summarize; Clumbers are slow moving spaniels who normally hunt at a trot, which they can maintain all day. They may be rather casual on barren fields, but should “come alive” when they hit bird scent. They should demonstrate excellent noses as they investigate the faintest scent thoroughly. Once on scent, they should be persistent as they “work it out” and show intense desire to catch the bird before it flushes. Their water retrieving should be adequate for close decoy hunting. Their water entry is deliberate and their swimming speed moderate.

Reprinted with permission from Darrell Reeves, Hunting Chairman CSCA and The Clumber Spaniel Club of America.